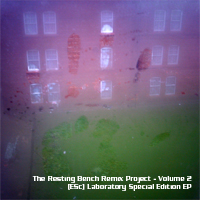 Back in the very hot summer of 2003, Tomahawk suggested occupying a garbage cellar room at the alternative artist`s working and living community Fabrik_Worms. His idea was to relocate there a band`s room.

Doc. AtmosfearCrush, former member of [analogwerk] insisted on establishing a whole project studio there instead. Then both guys mixed their ideas and in September 2003 the [Esc.] Laboratory booted its system up.

While Tomahawk`s background as a classic guitarist, songwriter and singer led him to explore new ways of working with music, Doc. AtmosfearCrush came from the more straight forward side of electro / techno as well as experimental sound design.

During the winter of 2003 Machete, former member of the Berlin based Projekt Klangform joined the base of creativity. His background of electro / techno and his love to experimental expressions of sound compiled the triangle.

While celebrating private studio parties a lot of people came in touch with the laboratory and joined from time to time the jam sessions. This was also the kicking idea of the studio`s own philosophy. Every track is a recorded moment in our lives! It`s a jamming monster of sound and rhythm, dark and hungry.

When performing live at clubs as well as exhibitions, the strategies were getting more minimalistic and soon both worlds, the side of studio producing and the side of live performances morphed in to each other.

Making music means to us the way to free us from agony, frustration, lust and the eternal sin. It`s a way of cleansing the soul. As we get deeper into the grains of sound we touch the creativity of chaos. The atmosphere of our environment leads us to the manipulations of the arrangement. We began to understand our feelings and translate them in to hearable numbers.

The Resting Bench Remix Project has been supported by Awards For All & Cumbria County Council as part of Monkey Noises, our education programme

The Resting Bench album - which includes the soundscape, the original recordings of the poems and copies of the exhibition artwork is available here

All the original sound files are still available to download under creative commons licence. They are yours to remix, remould and generally have fun with.
They can be downloaded from here so if you want to get involved get downloading and send your finished entry in high bitrate mp3 to - remix@earthmp.com and contribute to Volume 3